20 October 2022: Research from the British Property Federation (“BPF”) and Savills projects that the number of completed Build to Rent[1] (BTR) homes could increase five-fold to reach 380,000 by 2032, with the sector worth £170 billion, as the sector becomes an integral part of UK housing delivery and economic growth.

The projection, undertaken in partnership with Get Living, one of the UK pioneers of BTR, and M&G, a leading global investor and asset manager, shows that by 2032 8% of UK homes for rent will be purpose-built, up from 1.5% today.  The analysis predicts a continued evolution in the market, with single-family homes making up almost a fifth (18%) of BTR stock in ten years’ time compared to 12% today.

The new analysis has been undertaken to coincide with the ten-year anniversary of the Montague Review, a report commissioned in 2012 by then Housing Minister Grant Shapps to remove the barriers to long-term institutional investment into purpose-designed homes for rent. The review’s recommendations, which were adopted by Government, included more support for BTR in national planning policy and Local Plans, the release of more land for development and standardisation of tenants’ rights.

The Montague Review is widely acknowledged to have marked the birth of the modern BTR sector. The Olympic Village in Stratford, which was designed as temporary accommodation for athletes competing at the 2012 London Olympic Games, became the UK’s pilot BTR scheme once converted into professionally managed rented accommodation. Now known as East Village and owned and operated by Get Living, the neighbourhood has become a BTR success story, home to 7,000 residents and further development in the pipeline to cater to growing demand.

A decade later, as at Q3 2022, £30bn has been invested into the BTR sector, delivering 76,800 completed homes and a further 163,400 in the planning and delivery pipeline. While the sector still represents a small proportion of new housing delivery, it is growing rapidly with the number of completed BTR homes increasing by 14% year-on-year in Q3 2022. 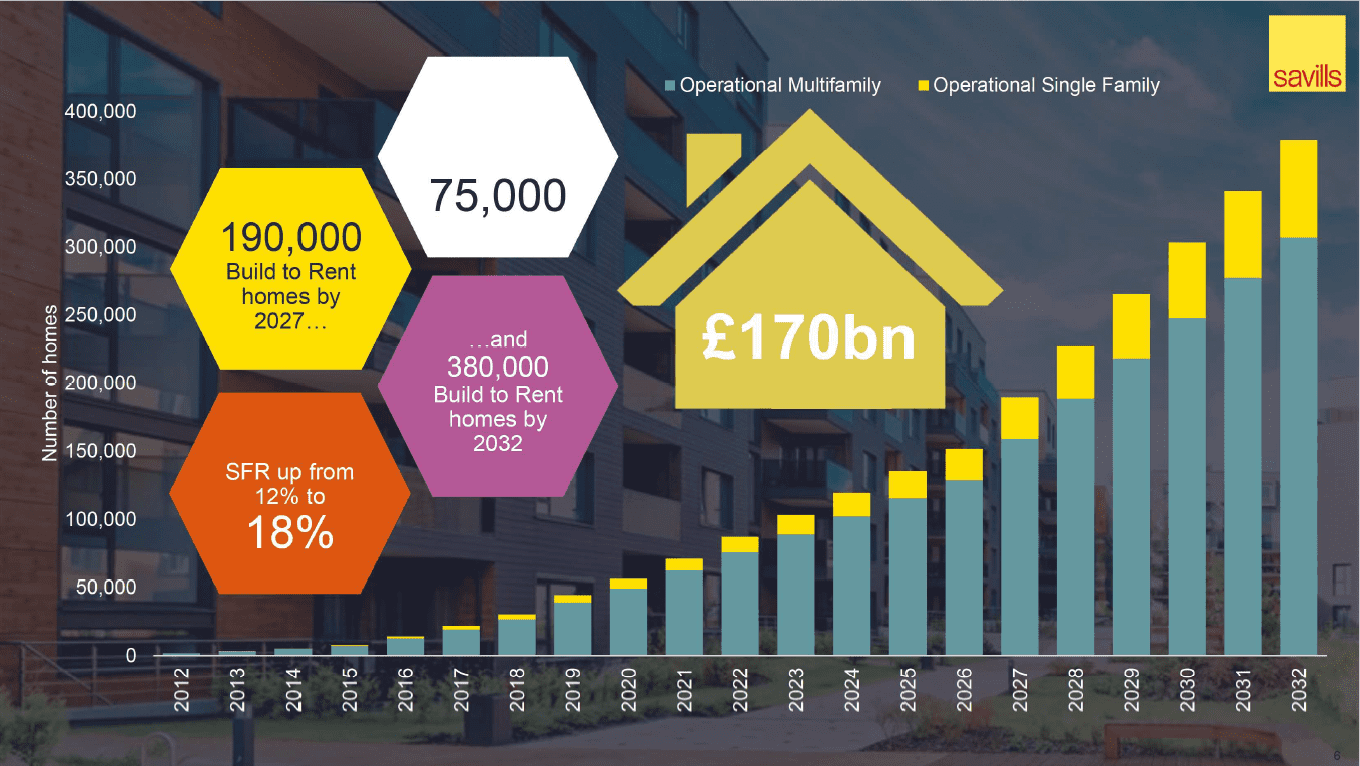 Following the review, developers and investors initially focused on London, but since 2017 there has been a shift towards other core UK cities, led by Manchester, Birmingham and Leeds. These cities are experiencing high population growth, along with a thriving professional sector and they have a need to attract and retain graduates and expand their workforce. Local authorities are now planning more effectively for the delivery of BTR homes, with 47% of local authorities now having BTR in their housing pipelines, versus just 20% in 2017.

Ian Fletcher, Director of Policy, British Property Federation, said: “The Montague Review was a significant moment that gave birth to the Build-to-Rent sector as we know it today. Ten years on we can say the review achieved its core aim of unlocking long-term institutional investment into homes for rent, helping address the chronic shortage of quality housing in an and around town and city centres and serving as a catalyst for urban regeneration.

“The current market conditions underline that we must continue to diversify housing supply in order to drive economic growth, and the Government must continue to look at how planning reform, more support for local authorities and the release of land for development can enable the sector to continue its upward trajectory.”

Jacqui Daly, Director of Residential Research, Savills, said: “When the Montague Review was undertaken in 2012 UK housing delivery was at its lowest level since the post-war period, and uncertainty in the lending markets post-GFC was suppressing delivery from traditional housebuilders. There are some parallels with where we are today, with Government suggesting it may abandon national housebuilding targets and rising interest rates set to cast a shadow over for sale market.

“What is clear, is that the demand for high-quality, professionally managed homes for rent is only going to increase, not only for the core demographic of graduates and young professionals but for single families, couples and individuals at all life stages. This underpins our projection that we will see huge growth in the sector over the coming decade as institutional investors look at asset classes that can deliver sustainable returns and align with their ESG strategies.”

Rick de Blaby, chief executive of Get Living, commented: “When Get Living launched in 2013, a year after the publication of the Montague Review, the Build to Rent sector barely existed in the United Kingdom. At East Village, we not only had to re-engineer the former Athlete’s Village, but also to effectively write the business plan for Build To Rent in the UK.

“BTR is now succeeding in its mission and has grown in the UK’s core cities and towns. At Get Living, the experience of operating our current 4,000 homes, with a further 6,500 in near term pipeline, gives us profound insight into what people want and aspire to have from their home, their neighbourhood, their amenity and the community within which they seek to belong. The responsibility for the entire BtR sector to deliver more homes, of high quality, within the reach of affordability, providing ambient well-being, with social and environmental value, in places that enable people to thrive, has never been more relevant, but in some respects is now more challenging.

“Get Living and others in the sector, want to play their part. It is incumbent on both the public and private sectors to work together, find alignment and work to resolve the barriers, so that the UK can address the on-going shortage of housing, so that everyone can have a home they deserve. For our part, we are driven by the need to innovate, to meet the demand and constantly improve the resident experience.

“As the Savills research demonstrates, there is a huge growth in store for Built To Rent and we only have to look at the scale of the sector in the US to see what can be achieved.”

Alex Greaves, Head of UK and European Living, M&G Real Estate, said: “The BPF’s findings highlight the coming of age of residential as a mainstream asset class and confirm the importance of Build-to-Rent within the wider private rented sector.

“Over the last 10 years, institutional investment into BTR has made a significant contribution to UK housing numbers with further growth continuing year on year.  It provides professionally managed homes across a wide range of locations, price points and age groups.  From an investor perspective, BTR is highly defensive in terms of cash flows, provides consistent returns for investors and offers clear opportunities to create low-carbon homes and ESG-led rental communities.  We continue to explore new investment opportunities across the UK and can only see the sector growing in strength over the next decade.”

Elizabeth Line opening May 24. What this means for Stratford journey times